Born in Kyoto and lives in Tokyo. He is a multimedia artist who presents his work in many fields such as games, graphics, photography, video, and music.
Both his father and grandfather are photographers. He spent his childhood in an environment where the adults around him were all artists, and during his school days he studied design and photographic engineering at two universities.
He spent eight years as a student with two school enrollments, ronin, studying in the US, and retention. In the meantime, he began to take an interest in electronic music while producing photographs and designs, producing various experimental music and ambient music using synthesizers and tapes, and presenting them at live performances.
His music was also used for NHK program BGM and theme songs. Also released a cassette & silkscreen work "OBJECTLESS" from EP-4's Kaoru Sato's indie label "Skating Pears". The work was remixed by Sato himself and reissued on an analog record from VOD in Germany in 2017.

In 1991, he presented "Alphabetical Orgasm" in computer graphics at his first exhibition and was interviewed by many domestic and foreign presses. Since then, he has been constantly presenting his works. In addition, he has been involved in many works as a multimedia producer, debuting from Sony Music with "Eastern Mind", US title "EASTERN MIND" (Sony USA). Music CDs such as "EQUAL" have been released by Sony in Japan and Europe as well.
Then release PlayStation game "LSD: Dream Emulator" , famous as a cult classic from Asmic Ace.
In recent years, he released the music album "ALL THINGS MUST BE EQUAL", "OBJECTLESS", and "LSD REVAMPED" in Japan and Europe in parallel with producing graphic arts. Original album "GRATEFUL IN ALL THINGS" and graphic collection under the same name were released in April 2020, followed by the release of the same title in 2-disc analog sets.

At about the same time, edited board "COLLECTED AMBIENT GROOVES" containing songs composed from 1993 to 2001 was released by Musique Pour La Danse under Mental Groove in Europe, and design book "The Art of Computer Design" (originally "Compu Design") was newly translated and edited by San Francisco publisher, Colpa Press.
And in the fall of 2020, "TRANSFORMED COLLECTION" was released as a CD and analog record (both 2-disc sets).
In 2021, the first music and graphic work of the new project "LSD TRANSFORMED", which had been under preparation for a long time, is to be released by NFT. 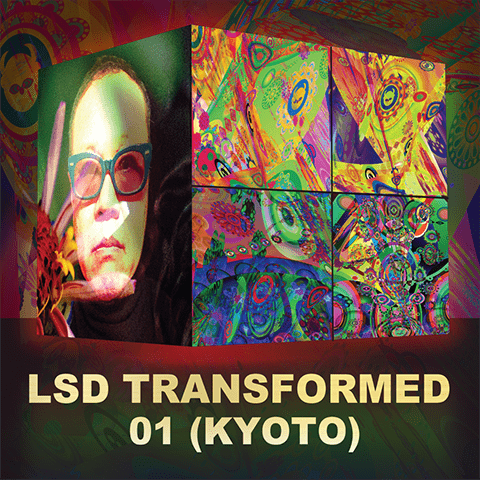